A holiday without a set schedule, zero possibility of any independent transport and no budget for an Interrail-ticket; how I still managed to travel around Europe for two weeks.

The original plan was to throw a small tent in the back of the car and simply drive off  – in which direction was for later worry. After investigating the possibilies of wild-camping (practially zero), it appeared that the car would not be available after all and I was without transport four days before leave. As a student, there weren’t many options left at this point; hitchhiking, interrailing or finding the cheapest flight possible.

A little birdie told me (three days before leave) about Interflix; a sort of interrailing, but then by Flixbus. A ticket would only cost me €99,- and ensured me of five journeys through Europe, whatever the destination, as long as it wouldn’t be a return ticket. Booking a seat could be done uptil 5 minutes before departure. Ideal! Especially with the vast network of Flixbus, pictured above.

And so the adventure started. First stop? Paris – a trip that took me 8 hours. We travelled at night and the bus was quiet, so sleeping was not a problem. So far, so good. Our campsite was in the middle of the city centre, close to a metrostation and only cost us €11,- per night. The terrain, around an old hospital building, was filled with new and creative companies, local bars and innovation.

After a couple of nights, our journey took us to Marseille. We quickly booked an AirBnb the morning we left. Our bustrip ahead would be long, 14 hours to be exact. The bus itself (Flixbus uses tourbusses) wasn’t all too bad, but the toilet stopped working a few hours before arrival. After 18 hours and a pair of sore, Dutch legs, we were told that we could ask a refund because of the inconvenience and delay. All was settled nicely. 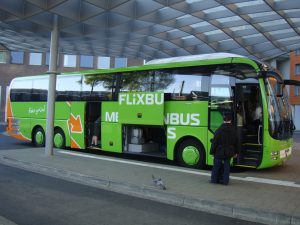 After Marseille, we went to Munich. This would take up 11 hours, this time in a luxurious bus, with room for our long legs, a spacious toilet and the possibility of freshly made coffee and tea! There was a bit of a delay at the German border, but this was no problem at all because of the comfort. Once in Munich, we found a cheap appartment and rented it for a couple of days.

At this point, it was time to go home, sadly. So we booked our final trip. The bus itself, a double decker, wasn’t too special. The two bus drivers on the other hand, were amazing and thrilled to have some Dutch people in their bus. After a couple of hours filled with jokes, cheeky comments and a small detour, we set foot on our own land again, arriving in Eindhoven.

The fexibiliy and easy of travelling with Interflix is very pleasant. Being able to choose your next destination on the morning of departure is something that’s often not possible when working with reserved seats. Booking via their app was very easy as well. Seeing as there was wifi on board, there were many forenue that would stick around for one or two stops and quickly got some work done in the bus. The only negative aspect – the time it takes to travel – can be easily overcome by travelling at night.

All in all – it was an adventure. I definitely recommend!